https://analytics.google.com/analytics/web/provision/#/p313313796/reports/intelligenthome
Join with Davinci Animation and get job placement in animation industry

The animation industry in India is expected to grow at a pace faster than the IT industry's! Animation as a career option is a field where you can fulfill your dream of "enjoy-as-you-work" , feel satisfied at the end of your day and get praise from your clients as well.

One can study animation, graphics and multimedia courses either as a full-time or part-time student. Several programs are offered like certificates, diplomas, and degrees etc. While admission into full time courses, i.e. diplomas and degrees etc is offered on the basis of entrance exam, admission into part time and short term courses is offered on first come first serve basis. There are many number of institutes in all major cities and towns of India, both private and government for providing training in animation, graphics and multimedia. Many institutes also provide internship and arranges for job placement during or after completion of the course. As of 2015, the animation industry has matured in India and has moved on from being just an outsourcing facility to a creator of indigenous intellectual property as well. There are more than 300 animation studios in India as of 2015, which are estimated to have employed more than 15,000 animation professionals. As per the FICCI KPMG 2015 report, the year 2014 saw the value of VFX grow the highest at 22 per cent, followed by post-production at 15 per cent, animation production at 9 per cent and animation services at 1 per cent.
We can see that the animation, VFX, gaming and comics (AVGC) sector of India is only set to grow further. As of now, 20,000 (5%) people out of 4 lakh people in the
media and entertainment sector are employed in the animation, VFX and gaming side. This figure is expected to rise to 30,000 by year 2017 and 4.4 lakh by 2023.

Though, these are some examples only. Opportunities exists both with government as well as private sector enterprises. Animation itself is an industry, and as industry it’s on boom. There exist numerous animation houses both in India and abroad who work for clienteles. An animator and multimedia professional can also work as freelancer or start his / her own enterprise given he / she has entrepreneurial skills and funds for investments. Animators work in various capacities. For details on career options in Animation, Graphics, Multimedia & Gaming.
Best college/institute to learn animation,vfx,web design,graphic design and interior design is DaVinci International Institute Of Design,Mangalore 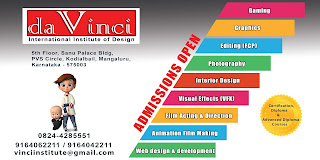 Remuneration
Animation is a dazzling career <!-- Global site tag (gtag.js) - Google Analytics -->
<script async src="https://www.googletagmanager.com/gtag/js?id=G-WNX8CQY2PZ"></script>
<script>
window.dataLayer = window.dataLayer || [];
function gtag(){dataLayer.push(arguments);}
gtag('js', new Date());
gtag('config', 'G-WNX8CQY2PZ');
</script>option. After finishing the in-house training with leading animation production studio, one can work as a junior animator with salary ranging between Rs.12000 to Rs.18000. As an animator gains expertise and experience, he/she can surely look forward for promotions and salary anywhere between Rs. 25,000 to Rs.40, 000. Those who start own business houses can exploit the opportunities hidden in animation industry up to maximum extent. It’s one of the goldmine fields to explore.for more information call us on 9164062211

Posted by satyavinci@gmail.com at 10:28 PM No comments:

Want to pursue Animation? Check out 5 simple steps to become an animator

Here are five simple steps to follow in order to excel as an animator today:

On the surface, an animation may seem like a fairly straightforward profession that requires an artistic skill-set but in reality, it consists of numerous different roles and job descriptions, each of which is a career in its own right.


Animation, being a highly versatile profession, spans several industries such as movies, advertising, sports, TV-shows, and video games to name a few.
The sheer scope, diversity, and complexity of the field mean that before committing to any particular facet its important to decide which stream of animation entices you the most and what role you would like to see yourself undertaking, a few years into the future.

Depending upon where your interests lie, you should choose a course of study that will best equip you with the skills you need.


While a formal degree from a prestigious institution isnt necessary to become a great animator, it is advisable because most centres of learning tend to be very up-to-date with the latest technology and trends, making them extremely relevant to the current job market.
Contrary to most mainstream education systems, the field of animation usually offers courses covering the latest relevant techniques, software, and styles to fully equip a potential animator for the path ahead.

The best way for a potential employer to gauge your competence and proficiency is to create a portfolio that showcases your body of work.


It is wise to begin compiling your portfolio early on in your career, or preferably, while youre still a student and update and refine it as you move towards grander and more challenging tasks.

While the fundamental principles of animation will always remain the same, like any other industry it is subject to market trends and will evolve with the advancement of technology.

5: learn animation and vfx from davinci international institute of design 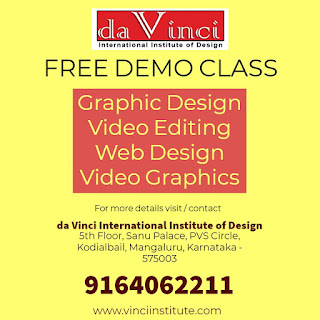 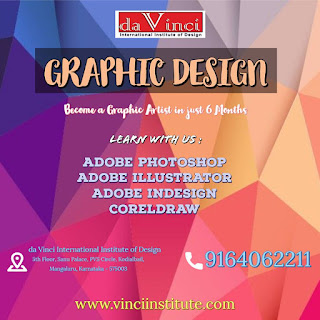 As a matured individual, we have taken several decisions in our life. Out of those, choosing a right career option is one of the most important decisions for the students after finishing their 12th. There are a number of career choices available for the students to choose and they can go with their likes and preferences. In this post, we will discuss animation as a career option or animation course after 12th.

Posted by satyavinci@gmail.com at 11:44 PM No comments:

In past couple of years Entertainment industry has taken a big leap. On line Films and web series has taken over VFX to its core. Having the knowledge of VFX and editing is not enough, learning the art of Cinematography and film Making is also needed.  Taking up filmmaking courses will give you the knowledge of photography, graphic designing, audio mixing and lighting techniques which will in short open up your options to pursue different sectors in the film industry. These courses will help you gain practical knowledge, which is a important for entering the world of filmmaking.  Ideas and creativity can be explored to its fullest while working in the film industry. Film Making uses a variety of technologies and cinematic techniques. Filmmaking courses helps to learn different types of skills, opening doors to different job roles according to ones best interests. One can start from making documentary films later on change to digital filmmaking. Connection with people is very important to keep continuity in work. Networking leads to good and quality jobs in film industry.  Filmmaking starts script writing followed by screenwriting, casting, pre-production, shooting, sound recording, post-production and screening. It uses a variety of technologies and cinematic techniques. Fresh batches have been started in our Institute, for those who are interested in Cinematography and Film Making can join us at the earliest to gain all the knowledge and techniques to become one of the finest Cinematographer. 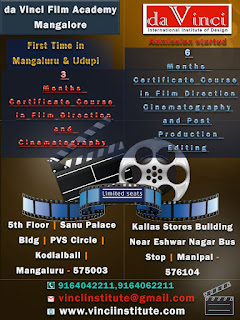 Posted by satyavinci@gmail.com at 3:57 AM No comments: